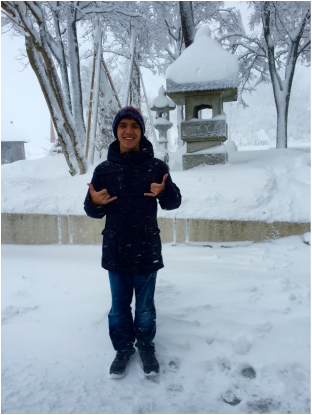 HKN Professional Biography
Brandon S. Amano is a senior pursuing a bachelor's degree in electrical engineering at the University of Hawaii at Manoa. His academic interests have steered him towards the electro-physics track, with a particular specialty in hardware, digital, circuit, and PCB design. He is currently a hardware engineer for the Smart Campus Energy Lab (SCEL), serving member of the MicroMouse Executive Board, and the President of the Delta Omega chapter of IEEE-Eta Kappa Nu (HKN). Expecting to graduate in the Spring 2016 semester, he will be moving to California with a job as a Systems Engineer at Raytheon's Space and Airborne Systems division. Outside of school, his hobbies include gardening, hiking, biking, and traveling.

Q: What video game / movie / TV show would you want to live in and why?
If I could live in any fictional world, it would have to be either the Harry Potter or the Avatar: The Last Airbender / Legend of Korra universe. I would want to learn all the magic spells by heart or be the master of all four elements, a.k.a. a fully-realized Avatar!!

Q: What would you like to accomplish the most from your “bucket” list?
Hmm...thankfully I was able to cross off playing in snow this past 2015 winter break, but the next item I would like to accomplish off of my bucket list would be to travel to all the famous cities and wonders of the world. ​

Q: What inspired you to join HKN?
I was inspired to join HKN because of the reputation the Delta Omega chapter has as an honor society at the CoE. The community service and networking opportunities was a great way to become more involved with school outside of just classwork and projects. I was also excited to go through the pledging process alongside people who would eventually become my close friends.