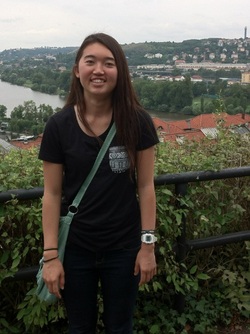 HKN Professional Biography
Daisy Green graduated in Fall 2015 from the University of Hawaii at Manoa with a Bachelor's of Science degree in Electrical Engineering. She graduated in the electro-physics track. She is interested in renewable energy and power systems. While at UH Manoa she was part of the Smart Campus Energy Lab (SCEL) and The Hawaii Center for Advanced Communications (HCAC). She plans on pursuing a Masters of Science in Electrical Engineering starting in Fall 2016. She hopes to do research on smart grids. Outside of school, she likes to play tennis, go hiking, and traveling.

Q: Where is your hometown and favorite place on the island?
My hometown is Waikoloa, on the Big Island of Hawaii.


Q: What inspired you to join HKN?
I was inspired to join HKN to network and meet other electrical engineers.