The Order of the Engineer

The Collapse of the Quebec City Bridge
by Bruce Ricketts 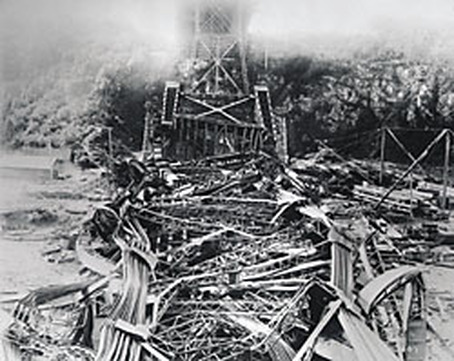 The Quebec City Bridge after its collapse.
In 1907 Quebec was building the biggest cantilever bridge in the world.  Little did they know that on August 29 that they would also experience one of the largest bridge collapses in history.

The bridge across the St. Lawrence River, six mile above Quebec City, was the brainchild of the Quebec Bridge Company, a group of local business people.  Until then goods were brought from the south shore to Quebec City by ferry.  In 1903 the QBC gave the job of designing of the bridge to the Pheonix Bridge Company.  They also contracted a renowned bridge builder from New York by the name of Theodore Cooper to oversee the engineering design and construction.

The peculiarities of the site made the design of the bridge a most difficult one.  Because the St. Lawrence was a shipping lane, the 2800 foot bridge must have an 1800 foot single span, almost 150 feet above the water, to allow the ocean-going vessels to pass.  Further, the bridge was to be multifunctional and was required to be 67 feet wide to accommodate 2 railway tracks, two streetcar tracks and two roadways.

For those who are not familiar with a cantilever bridge design, think of it as a continuous beam anchored at both ends to pillars.  The key to the bridge design was the weight of the centre span.  This cantilever design is also use in large building where interior pillars cannot be used to support the roof, such as aircraft hangers.

In late 1903, P.L. Szlapaka of the Pheonix Bridge Company, had laid out the initial drawings of the bridge.  His design was approved with very few changes by Cooper.  The estimated weight of the span was calculated based on these initial drawings.  In 1905 the working drawings were completed and the first steel girder was bolted into place.  These working drawings took over seven months to reach Cooper for final approval.  In the meantime the work had begun.  It wasn't until Cooper received the drawing that he noticed that the estimated weight of the span was off, on the low side, by almost 8 million pounds.  Cooper had one of two choices: condemn the design and start over; or take a risk that there would be no problem.

Telling himself that the 8 million pounds was within engineering tolerances, Cooper let the work continue.  After all, he wanted to be known as the designer of the greatest bridge in the world.  Also factored into the decision was that fact the Prince of Wales (later to be King George V) was scheduled to open the bridge in 1908 and any delay in construction would upset the planning.

His was a fateful decision.

On June 15, 1907 an inspecting engineer noted that two girders of the anchor was misaligned by a quarter of an inch.  Cooper called this a "not serious" problem.  In the inspection report in August, 1907, it was noted that the girders had moved out alignment a bit more and "appeared bent".  Although this condition was a bit more concerning, the work continued.

On August 27, 1907 the warning bells finally went off when the inspection team headed by Norman McLure, noted that, over the weekend, the girders had shifted a "couple of inches" and were more obviously bent.  The engineers on site decided to send McLure to New York to consult directly with Cooper.  B. A. Yenser, a senior engineer on site for Pheonix, agreed that the problem was serious enough to warrant the trip.  There was a telephone at the construction site, but phoning Cooper was deemed not wise because the phone was on a party line and the wrong ears might be listening in.  And they certainly did not want to alarm any one.

The next morning, with the engineering team off to New York, Yenser took it upon himself to continue work.  When asked why he restarted the work considering the condition of the girders, he stated that he "had a dream".  In the dream he was told that the girder problem was not serious.  The team had not yet heard from Cooper but  the other senior engineers on site, for some reason, agreed with Yenser.

At 5:32 PM on the 29th of August, while McLure was making his way back from New York, all hell broke loose at the construction site when the girders trembled with a grinding noise and gave way.  The bridge structure plunged over 150 feet taking with it the lives of 75 workers.

The bridge construction was restarted in 1913 and completed in August 1919.  Almost 12 years to day after the tragic day, the Prince of Wales finally opened the memorial to the men lost in the Quebec Bridge Collapse.